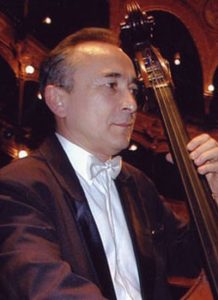 Rustem Gabdullin spent more than 20 years with the State Chamber Orchestra of the USSR before joining the RNO(Russian National Orchestra), as principal, in 1990. He tours Russia regularly in recital and as guest soloist, appears at music festivals throughout Europe and played with the London Symphony Orchestra as guest bass principal.

Gabdullin’s performances include the world premieres of double bass compositions by contemporary Russian composers, several of which are dedicated to him. Gabdullin records for Russian radio and has made a CD of works by Bottessini and Kussevitsky. A professor at the Moscow Conservatory, where he also studied, Gabdullin has published music anthologies containing his own reductions and transcriptions for double bass, and given master classes in the US, Sweden and Korea. In 1995 he was awarded the title of People’s Artist, the highest professional distinction given by the Russian government.